The revolution will be televised

Lord Razor of the Fist Clan has exceeded even his excellent, and loquacious, standards with his latest rant about the Communist origins of the current obsession with “canceling” everything that the woke mob dislikes:

He is, as usual, 100% correct. His research into this stuff is solid and his analysis is spot-on. The uncomfortable reality that most of us would rather not confront is that the mobs rampaging through the streets of America’s greatest cities are all fundamentally enslaved to the Satanic ideology that is Communism.

We may not like it. We might like to believe that we defeated the Commies in 1990. We fervently wish and hope that St. Reagan Magnus of the Right dumped their evil system right onto the ash-heap of history where it belonged.

But we were wrong. And that reality is smashing our teeth in with a two-by-four right now.

The key to understanding how we got to this point lies in the fact that the Communists understood, a VERY long time ago, that they could not possibly hope to defeat the West economically.

This has been known since, very roughly, the days of the Italian Marxist Antonio Gramsci. His argument was that economic Marxism was not nearly enough to destroy the capitalist West, and he started making that argument at roughly the same time as Lenin’s Revolution took place in Russia. That is how far back the Communists actually understood that Marxist economics, on its own, will not be sufficient.

It was Antonio Gramsci who first articulated and elucidated the idea of taking over the institutions of the Western world, and thereby allowing the West to destroy itself from within.

And that, my friends, is PRECISELY what has happened.

While the legendary Cold Warriors of the Reagan Era were fighting to win the war against the USSR – which they did, handily, and ironically did so by turning several of Gramsci’s own ideas about subverting institutions right on the Communist Party of Russia themselves – the infiltration by Marxist intellectuals of America’s institutions had already been going on for decades.

There was a time when nonsense like “critical race theory” or “intersectionalism” or “third-wave feminism” or “transgender rights” were all nutcase philosophies espoused by the lunatic fringe. That was within living memory – I moved to the USA when George W. Bush was President, and back then, such ideas were considered crazy by pretty much the entire mainstream.

As Laura Ingraham points out, however, today those Cuckoo-for-Cocoa-Puffs ideas are mainstream:

And one of those once-crazy-now-mainstream ideas is indeed the notion of cancel culture.

This is standard operating practice among Commies, and its effects were most powerfully demonstrated in George Orwell’s seminal work 1984. You know how it goes – we have always been at war with Eastasia Oceania Eastasia. Whenever the Commies encountered something that they really didn’t like, they would scream and shout and riot and use mob intimidation tactics, if necessary, to erase it from history.

The methods used were various, insidious, and devastatingly effective. Sometimes they were subtle, such as when Stalin would have his political enemies and victims mysteriously “airbrushed” out of photos of record. Others were overt, such as the Cultural Revolution in China or the efforts of Pol Pot’s Khmer Rouge in Cambodia to wipe the slate clean of intellectual ideas that they found “offensive” – like, oh, mathematics.

Here’s an example of the former:

And here’s one of the latter: 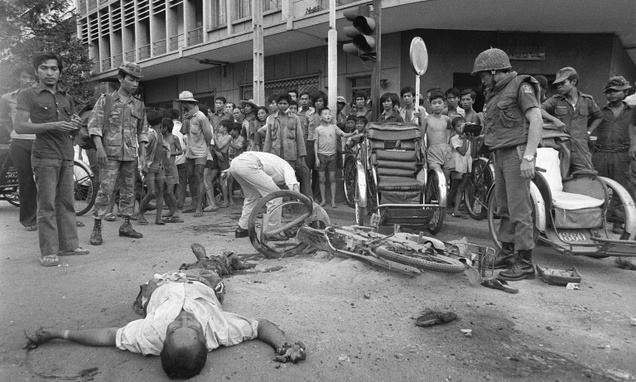 (Side note: I visited Phnom Penh when I was a few months shy of 18. It had clearly come a long way from the Hell Times of the Communist regime, but it was clear to anyone with eyes to see just how badly the city was affected by the devastating economic and political consequences of their “glorious” Year Zero revolution. I am given to understand that things have improved markedly in the twenty or so years since I visited, though.)

Always and everywhere, the goal was the same: to eliminate undesirable thought and action, and to intimidate, browbeat, silence, and outright destroy anyone who dared to think differently.

And there is no more effective way to do precisely that, in this current day and age, than through the medium of television – or, in many cases, the Internet.

The extreme violence, hysteria, and devastation that you are seeing on your TV and computer screens is not accidental. There is a design and a purpose behind ALL of it.

Those of a secular bent would argue that this design is guided by the hands of shadowy Deep State types, and they would be correct. Those of a religious, specifically Christian, persuasion see deeper than even the Deep State level, and understand that this is all deliberately orchestrated and managed by an even more dangerous power. You know of what I write, and you know that I am correct.

The object lesson that all of us must learn – as fast as bloody possible – from the madness that we are seeing around us is that there is only one way to stop it.

You have to hold firm. You MUST stop the infiltration before it even has a chance to take hold – otherwise it will take root and spread like truly virulent and deadly cancer throughout the body of the host.

That is precisely what has happened to the West’s greatest institutions – its universities, its media, its entertainment industry, even its government and military. The very bulwarks that a free and representative republic relies upon to prevent these sorts of breakdowns of civic order, are supporting those breakdowns right now.

I want you to understand this very well: THIS IS NOT AN ACCIDENT. This is deliberate.

So how do you and I stop it?

By using the one and only weapon that even the madness of the mobs cannot withstand.

By telling the truth, as much and as often and as plainly as we can.

That is how economic communism was defeated – by exposing its foundations to be the insubstantial rhetorical nonsense that they always were.

That is how cultural communism will also be defeated – by cutting it off from its sources of funding, by forcing its adherents to live by their own rules, and by walling them into their own play-pen where they can devour each other.

And, most importantly, by learning some very harsh truths about race, gender, culture, and trust, and never, ever forgetting them.